Suncorp Group
"One House To Save Many" 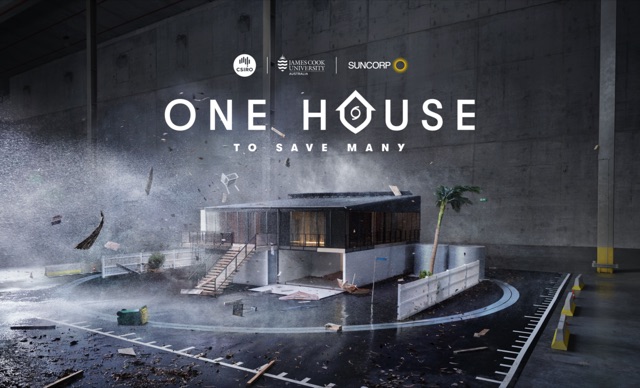 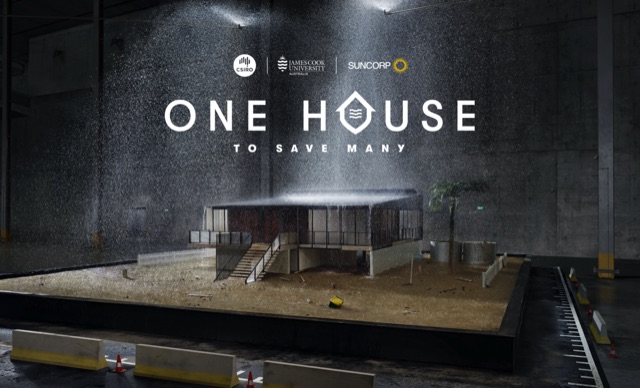 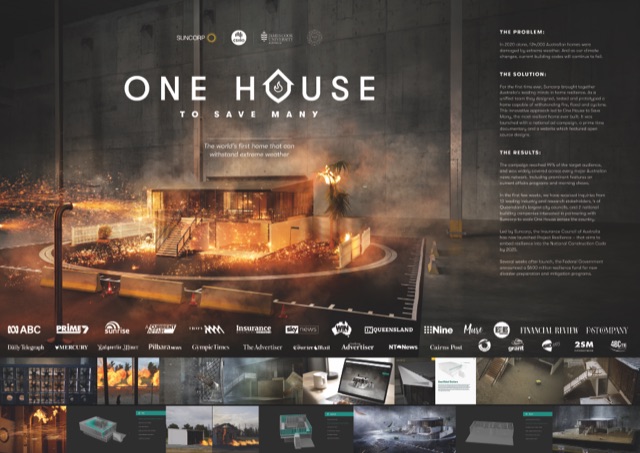 Background: Every year, during Australia’s ‘Storm Season’ (November to April), hundreds of thousands of homes are destroyed or damaged by extreme weather. And thanks to climate change, it’s only getting worse. In fact, entire communities in North Queensland are no longer insurable. So Suncorp, one of Australia''s largest insurers, briefed us to create a campaign that would help make Australian’s more prepared for future storms. Create awareness about Suncorp products. And demonstrate Suncorp’s commitment to Australia’s resilience.It was to be a fully integrated campaign, including brand and product TV, OOH, print, socia, radio and digital utility. And the primary audience was the State of Queensland, with an ideal PR reach including the rest of Australia.

Idea: Each year, hundreds of thousands of Australian homes are destroyed or damagedby extreme weather. And each year nothing changes. We just pick up the pieces, rebuild the same way, and hope it won’t happen again.The only way to change this cycle of destruction and heartache, is to completely change the way we build our homes. So that’s what we proposed to Suncorp, one of Australia’s largest insurers.‘One House To Save Many’ is the world’s first home designed, scientifically tested, and built to withstand cyclones, floods and bushfires.To create it, we brought leading experts in home resilience together for the first time. Combining their knowledge to create groundbreaking resilience features. Like mesh screens to protect against fire and debris. Water diverting retaining walls. And air pressure relief systems to prevent cyclone damage.The project launched with a national ad campaign and prime time documentary. The advertising drove people to an online hub where they could find out how to make their own homes more resilient, and explore Suncorp products. And the learnings from One House were then made available to the public and presented to government institutions and national building companies. Led by Suncorp, The Insurance Council of Australia has now launched ‘Project Resilience’. Aiming to embed resilience into the National Construction Code by 2025. And the Australian Federal Government has announced a 600 million dollar resilience fund for new disaster preparation and mitigation programs.And as a result of the learnings, Suncorp created a new product. In an industry-first, Suncorp Insurance launched the “Build it Back Better” promise that applies the resilience learnings from One House to every home they rebuild.This wasn’t just about building One House, it was about changing the way we build every house.

Results: One House sparked a national conversation around how Australians think about their homes and existing building codes. The project has already reached over 99% of its target audience, and was covered across all major Australian networks - achieving 20M+ impressions. It had prominent features on current affairs programs and morning shows. And the documentary also aired multiple times on a major broadcast network (channel 9).More than 110,000 unique visitors visited the One House hub, with an average dwell time of 3.7 minutes. The campaign continues to yield significant business results, including:Consideration amongst non-customers of Suncorp has gone up 38% Market share in Home Insurance has gone up 7.3%. Increase in new business calls to Suncorp, by 8%Increase in total home insurance quotes by 29%Increase in net home insurance new business by 9%As a result of the learnings from One House, Suncorp have created a new product. In an industry-first, Suncorp Insurance launched the “Build it Back Better” promise that applies the resilience learnings from One House to every home they rebuild. Furthermore, we’ve received inquiries from 13 leading industry and research stakeholders, 4 of Queensland’s largest city councils, and 2 national building companies interested in partnering with Suncorp to scale One House nationally. We can also share that, led by Suncorp, the Insurance Council of Australia (the representative body responsible for all insurers in Australia) has since launched Project Resilience - which aims to embed resilience into the National Construction Code by 2025.And finally, the Federal Government has announced a $600m resilience fund for new disaster preparation and mitigation programs.