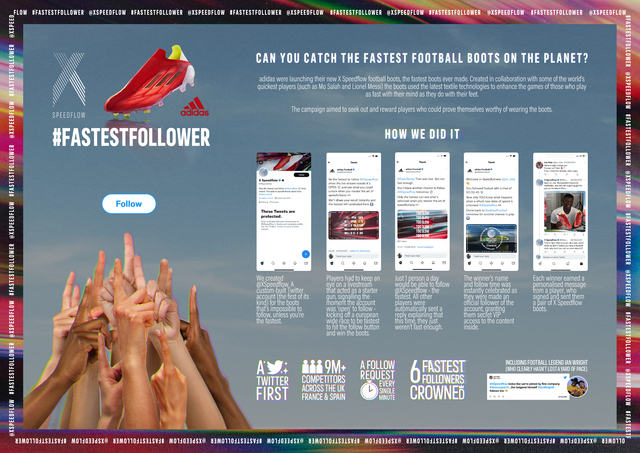 Background: adidas tasked us to drive hype & desire for their new X Speedflow football boots by positioning them as the fastest football footwear on the planet.The X Speedflow boots were created in collaboration with some of the world's quickest players (including Mo Salah and Lionel Messi). Using the latest textile technologies, the boots enhanced the games of those who play as fast with their mind, as they do with their feet.To get football fans to truly understand X Speedflow stood for speed, we had to produce an idea that would go beyond passive consumption. Our campaign aimed to seek out and reward those who could physically prove themselves worthy of wearing the boots.

Idea: Football players are always looking for an edge on the pitch. That extra yard of pace can make all the difference between winning and losing. The successes of the players on the pitch fuel the fans' competitiveness off it. Everyday on Twitter rival fans brag about their team's ability to out think, out muscle, and out run their opponents.This time, we challenged the fans to prove their worth.We created @XSpeedflow. A custom-built Twitter account for the boots (the first of its kind) that’s impossible to follow, unless you’re the fastest.Can you catch the fastest football boots ever made?Players across the UK, France and Spain had to keep an eye on a livestream from @adidasFootball that acted as a starter gun, signaling the moment the @XSpeedflow account was ‘open’ to follow - kicking off a European wide race to be fastest to hit the follow button and win the boots.To make the campaign accessible across 3 different markets, every touchpoint of the user journey featured language cycling visuals that morphed to adapt to English, French and Spanish.Just 1 person a day would be able to follow @XSpeedflow - the fastest. All other players were automatically sent a personalised reply after hitting ‘follow’, explaining that this time, they just weren’t fast enough. This was a unique functionality built exclusively for this campaign that had never been done before on the platform.The winner’s name and follow time was instantly celebrated as they were made an official follower of the account, granting them secret VIP access to the content inside.Behind the scenes was a sophisticated moderation tool. To avoid the risk of our winner being a potentially offensive account, we created a tool that allowed the first batch of fastest followers to be displayed in a shortlist. This allowed us to pick the fastest brand-safe winner from that list. Once chosen, the winner's time and @handle was instantly displayed in the live stream and the ‘follower request’ was accepted. The rest in the shortlist would then automatically be sent their ‘too slow’ response.Each winner earned a personalised message from a top football player who meant something to them. This included Gigi Windaldum for our winning Liverpool fan, Achraf Hakimi for our winner in Paris and Joao Felix for the fastest from Spain. Each of them signed and sent a pair of X Speedflow boots to the winner.

Results: 9+ MILLION COMPETITORSThe campaign generated more than 9 million live stream viewers as people eagerly awaited their chance to pounce on the follow button (that’s more than the population of Austria).A FOLLOW REQUEST EVERY 60 SECONDSOn average, the @XSpeedflow account had someone hit the follow button every single minute the campaign was live.A TWITTER FIRSTThis was a completely bespoke hack of the Twitter platform, uniquely manipulating the API to send personalised automatic replies to people who tapped the follow button of the account.EVEN PRO-BALLERS PLAYED6 fastest followers were crowned, including 2 million follower strong Arsenal & England legend Ian Wright (who clearly has not lost a yard of pace since retiring from the game).