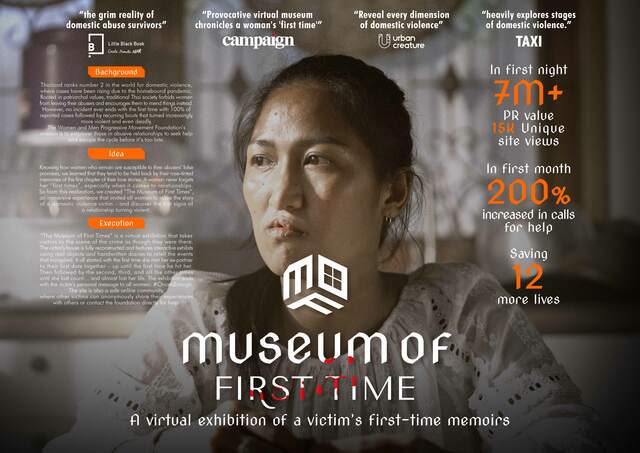 Background: Thailand ranks number 2 in the world for domestic violence, where cases have been rising due to the homebound pandemic. Rooted in patriarchal values, traditional Thai society forbids women from leaving their abusers and encourages them to mend things instead. However, no incident ever ends with the first time with 100% of reported cases followed by recurring bouts that turned increasingly more violent and even deadly. The Women and Men Progressive Movement Foundation’s mission is to empower those in abusive relationships to seek help and escape the cycle before it’s too late.

Idea: Knowing how women who remain are susceptible to their abusers’ false promises, they tend to be held back by their rose-tinted memories of the first chapter of their love stories. A woman never forgets her “first times”. So from this realization, we created “The Museum of First Times”, an immersive experience featuring a 360-degree view that simulates an actual environment and a real story from a real domestic violence victim. The house is fully reconstructed and features interactive exhibits using real objects and handwritten diaries to retell the events that transpired. It all started with the first time she met her ex-partner to their first date together – up until the first time he hit her. Then followed by the second, third, and all the other times until she lost count… and almost lost her life. The conclusion of this exhibit confronts you with a video of the actual victim’s personal message to all women, reminding that when it comes to domestic violence “once is enough”.The site is also a safe online community, where other victims can anonymously share their experiences with others or contact the foundation directly for help.Link to Museum : https://www.museumof1sttime.com/en/