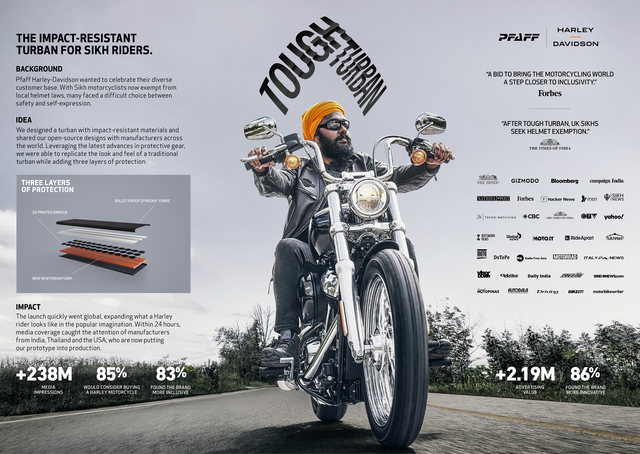 Background: Harley-Davidson is a brand built on a love for the open road, and its riders are passionate for the freedom that it offers. Yet for some riders, that freedom has come at the expense of their safety and their very identity. Pfaff-Harley Davidson, the brand’s largest Canadian dealership, wanted to do something about this.For Sikh men, the turban is a deeply important part of their identity. In 2018, the Ontario government passed legislation that exempts Sikh men from helmet laws. This was a hard-won step forward, but it also introduced a critical question: How could Sikh riders engage in their passion and still ensure their safety while riding without a traditional helmet?Harley-Davidson has a diverse ridership, yet it’s often perceived to be the choice of old white men. This was an opportunity for Harley-Davidson to help a group of riders overcome a big hurdle to fully embrace their passion – and to send a clear message about the importance of diversity.

Idea: In ancient times, Sikh warriors would go into battle with chain mail woven into the fabric of their turbans. This provided protection without violating religious tenets. It sparked our thinking: Why couldn’t a modern-day equivalent be created to provide the safety that Sikhs deserve? It also led to the insight driving the initiative: With the right motorcycle gear, Sikh riders could be empowered to protect who they are.Tough Turban is a marriage of ancient traditions and modern, high-tech engineering. It’s a turban made of impact-resistant materials that also fully respects the requirements of the Sikh faith. Armed with a powerful concept, we assembled our team of industrial design experts with experience in 3D printing and composite fabrics used in bulletproof clothing. After a series of prototypes, a final design was developed. The outer layers include Dyneema, a 3D-printed carbon-fibre take on chain mail, and non-Newtonian foam, which is normally pliable but hardens instantly on impact. These are the elements that make it a tougher turban.We published open-source production files for the turban to enable manufacturers anywhere in the world to be able to produce the turbans in their own markets. PR support outlining the initiative launched in early June, including posts on all of Pfaff Harley-Davidson’s social channels.

Results: Media response exploded overnight, with coverage in 171 US media outlets, 54 in Canada, 18 in the UK, and 11 in India, totalling 238.8 million earned impressions and an advertising value of $2.19 million. Quantitative research with people who own or are planning to buy a motorcycle showed a significant shift in perceptions after they’d been exposed to the Tough Turban initiative: 87% saw Harley-Davidson more favourably83% saw Harley-Davidson as more inclusive85% were more likely to consider buying a Harley-DavidsonThree manufacturers have reached out to explore large-scale production, including the world’s largest producer of two-wheeled motorized vehicles. After hearing about Tough Turban, British Sikhs were inspired to ask their government to re-examine turban laws.