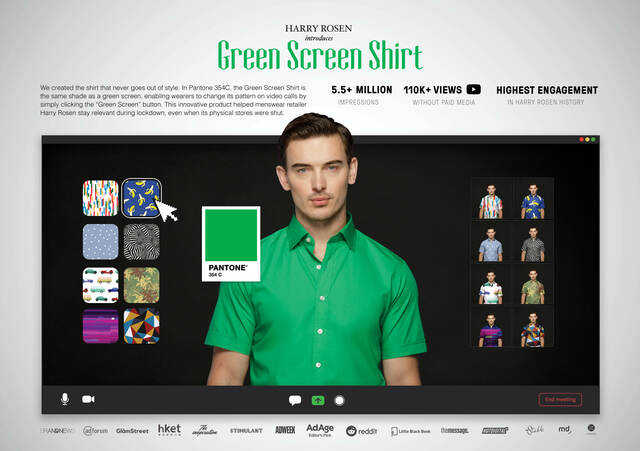 Background: For 70 years, Harry Rosen had built its luxury menswear brand on a high-touch retail approach. When men needed impeccable suits for the workplace, they would visit the store and talk to their “guy.” The COVID-19 pandemic turned that approach upside down. Stores closed. Harry’s business shifted to online. And Harry’s customers’ sartorial needs shifted as well. While entire skyscrapers stood empty, the “dress for success” culture of business menswear eased.The new virtual business culture freed many men from the suit and tie. But all those Zoom calls posed a problem for men who wanted to express their personal styles. The insight: our ability to send a fashion signal in the virtual world is limited to one item and one item only – our shirts.

Idea: Harry Rosen’s Green Screen Shirt provided men with a wardrobe solution that absolutely nailed the zeitgeist.We began by engaging Harry Rosen’s master tailors to manufacture a shirt in fabric of the precise shade of green (PANTONE® 354 C) needed for green screening. By hitting the Green Screen checkbox on the Zoom platform and choosing a pattern, a wearer could instantly change the design of their shirt. There was no special software to install – the functionality was already built into Zoom.Knowing the luxury market loves a fashion drop (the release of limited-edition products in highly select environments), Harry chose Instagram for the shirt’s debut. Because there was no paid media budget, the campaign was launched as an organic contest only on Harry’s Instagram feed.To win a shirt, men had to tag two people and like the post. A custom landing page on HarryRosen.com promoted Harry’s latest fashion innovation and gave instructions on how the shirt worked while prompting visitors to shop the latest arrivals. The shirts were ready just in time for Father’s Day, traditionally a big day for Harry Rosen sales.

Results: Harry was among the first brands to take advantage of a behaviour that was increasingly established among even the most technophobic. This is particularly notable for a brand and a category – menswear – that is traditionally thought of as staid and conservative.The shirt that will never go out of style created quite an impression.The video generated more than 111,000 views on Instagram – the brand’s highest viewership ever and nearly three times its follower count – with zero paid promotion.All the shirts were immediately claimed in the contest.With hundreds of requests to purchase the shirt, Harry’s is exploring a product rollout.It was the most engagement Harry has ever experienced for a contest.“Ummmm shut up and take my money!!!” –@linniex“Now this is versatile fashion” – @badenroth“Oh nice work Mr Rosen” – @sandynicholsonphotoGlobal press coverage included Ad Age, Adweek, Little Black Book, AdForum and Reddit“The best marketing idea since Diamond Shreddies” – Reddit“The most versatile shirt ever” – Ad Age“A technological marvel” – The Message