Nestle
"Have a bite" 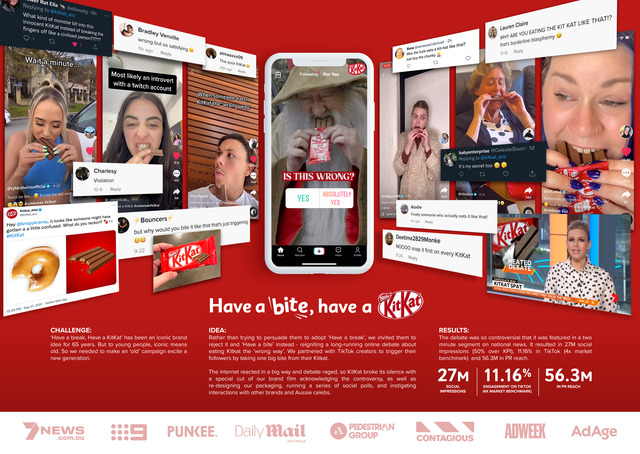 Background: ‘Have a break, Have a KitKat’ has been an iconic brand idea for 65 years. But to young people, iconic means old. So we needed to make an ‘old’ campaign excite a new generation and make the brand relevant to a younger audience that didn't necessarily have as strong a connection to the brand as previous generations did.

Idea: Rather than trying to persuade a new generation to adopt ‘Have a break’, we invited them to reject it instead, by dismissing one of the world's most famous product rituals. We acknowledged a long-running internet debate about the 'right way' to eat a KitKat, and unofficially gave our audience license to 'Have a bite' by ignoring the age old product ritual and taking one giant bite out of the iconic bar. We knew the resulting posts would be triggering, and generate some passionate discussion, so we planned to capitalise on that cultural moment in order to recruit this new generation to actually start defending 'Have a break' in its classic form.We began by partnering with TikTok creators to seriously trigger their followers by taking one big bite from their KitKat instead of 'breaking' a finger the official way. The internet reacted in a big way and debate raged, creating a huge amount of conversation in the first 48 hours. When the controversy was at its peak, KitKat took the opportunity to break their silence. A special cut of the recent brand TVC starring Aussie screen legend Michael Caton officially acknowledged the issue and asked 'Is this wrong?' via other social channels, before a packaging re-design, series of social polls, and live social interactions with other brands and Aussie celebs, also threw more fire onto the debate.

Results: 4.3 million views in 48 hours 11.16% engagement on Tiktok (4X the market benchmark) 27M social impressions (50% over KPI) 56.3M in PR reach The issue was so polarising that it was covered in a 2 minute segment on national news.