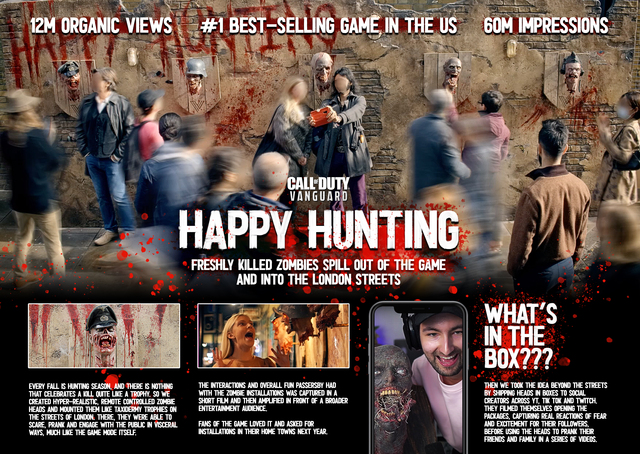 Background: Headed into the fall, Call of Duty needed to recruit new gamers into its premium title. One of the easiest ways to do that was to leverage a game mode more appealing to a casual audience, Call of Duty zombies, around Halloween to create enough social conversation that it would make people consider purchasing the new Call of Duty Vanguard title. To do that we were tasked with developing a talkworthy idea that brought our specific Nazi zombies out into culture to grab the attention of not only Call of Duty fans, but also broader entertainment and horror fans.

Idea: Every fall is hunting season and there is nothing celebrates the feeling of a killing a Nazi Zombie quite like a taxidermy trophy. So we created hyper-realistic remote controlled Zombie heads and mounted them like taxidermy on the streets of London, where they were able to scare, prank and engage with the public in visceral ways, much like the game mode itself. Every single zombie head was hand molded and sculpted by the same production company that made the animatronic characters from HBO’s Westworld. For every zombie head on the wall we collaborated with them to build a specific animatronic movement and create a personality that would either scare passersby on the street or grab their attention. It was the first time Call of Duty had ever brought their zombie characters to life in the real world in a way that matched the in-game experience. The interactions and overall fun passersbys had with the zombie installations was captured in a 2 min film and then amplified in front of a broader entertainment audience. Then, we took this idea beyond the streets and into the streaming world at large by creating several unique individual zombie heads that were shipped in WWII crates to 10 influencers across gaming, music and content culture.For zombie influencer kits we made simple, non animatronic heads but designed the silicon texture of the faces so when influencers picked it up out of the box it felt even more real and gross. We also built the influencer crates so they could transform into different stands that streamers and influencers could use to mount the head proudly behind them for all future gaming streams.