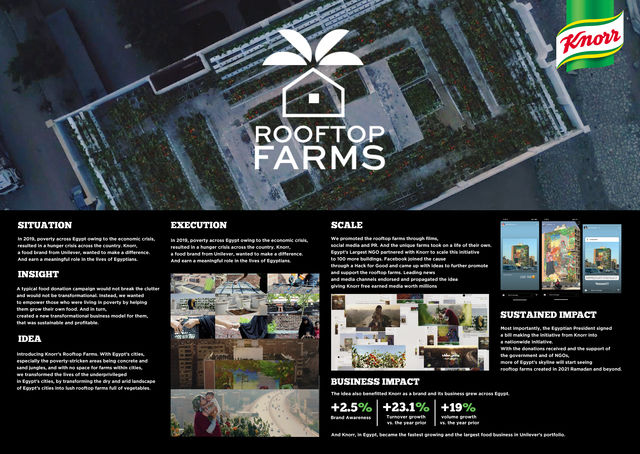 Background: In 2019, poverty across Egypt owing to the economic crisis, resulted in an Egypt-wide hunger crisis. Knorr, a food brand from Unilever, wanted to make a difference, and earn a meaningful role in the lives of Egyptians.A typical food donation campaign would not break the clutter and would not be transformational.

Idea: Instead, Knorr wanted to empower those who were living in poverty by helping them grow their own food, and in turn, create a new transformational business model for them, that was sustainable, scalable and profitable.Introducing Knorr’s Rooftop Farms. Working with engineers and hydroponic technology, Knorr created fully sustainable food gardens, placed across buildings in Egypt, operated by underprivileged farmers themselves, transforming the dry and arid landscape of Egypt’s cities into lush rooftop farms full of vegetables.All the food produced, was purchased by Knorr, giving the rooftop farmers a new sustainable source of income.

Results: With Knorr, we had set out to make a long-term impact and gain sustained success. The results in 12 months have been a very promising and encouraging indicator, not just from an awareness perspective, but even when it comes to impacting how Egyptians see, perceive and choose Knorr because of the good being done for their country by Knorr. In choosing to consume a brand that was doing good for people in Egypt, as shoppers preferred Knorr over other brands, Knorr’s brand and business grew across Egypt.(01) IMMEDIATE INFLUENCE:• With the launch of the initiative came thousands of questions, families requesting to take part; if not through a roof, then even through a balcony or a kitchen window! • Leading news and media channels, including the likes of CNN that featured a special report, endorsed and propagated the idea giving Knorr free earned media worth $3.5 million.• With a target of 2 million views, we managed to get 280% more than targeted views, not including millions seeing the murals every day on the streets across Egypt; reaching 10% of Egyptians. (02) BEHAVIOURAL INFLUENCE:• +42% purchase intent for Knorr in 12 months vs. the year prior (vs. the KPI of 20% growth to have the same intent its competitors).(03) SALES SPIKE:• +19% growth in volumes in 12 months vs. the year prior (vs. the KPI of 15% growth in volumes).(04) BRAND IMPACT:• +2.5% uplift in brand awareness over 12 months (vs. the KPI of +2% uplift in brand awareness).• +33% uplift in brand relevance over 12 months (vs. the KPI of +20% uplift in brand relevance).(05) COMMERCIAL IMPACT:• +23.1% in turnover in 12 months vs. the year prior (vs. the KPI of +20% in turnover).• Knorr in Egypt became the fastest growing food business in Unilever’s portfolio globally.(06) ENDURING IMPACT:• Knorr in Egypt became the 4th largest food business for Unilever in the world.• With the word of mouth, endorsements and partnerships, this topic was discussed in the Egyptian parliament and with the signing of a Presidential Bill, the rooftop farms initiative from Knorr was transformed into a nationwide initiative of its own as part of Egypt’s sustainable development plan. This was, perhaps, the main source of validation that we had made a nationwide difference.• We addressed 7 sustainable development goals – Goal 1: No Poverty, Goal 2: Zero Hunger, Goal 3: Good Health and Wellbeing, Goal 5: Gender Equality (as women were 50% of the rooftop farm owners), Goal 8: Decent Work and Economic Growth, Goal 11: Sustainable Cities and Communities, Goal 13: Climate Action; instead of the target of 1 goal (zero hunger).With the donations received, with the backing of NGOs and importantly, in a place like Egypt, with the support of the government to make it a part of the nation’s plans, we are going to be seeing Egypt’s skyline transforming even more with more rooftop farms growing and sustainably benefitting its people. 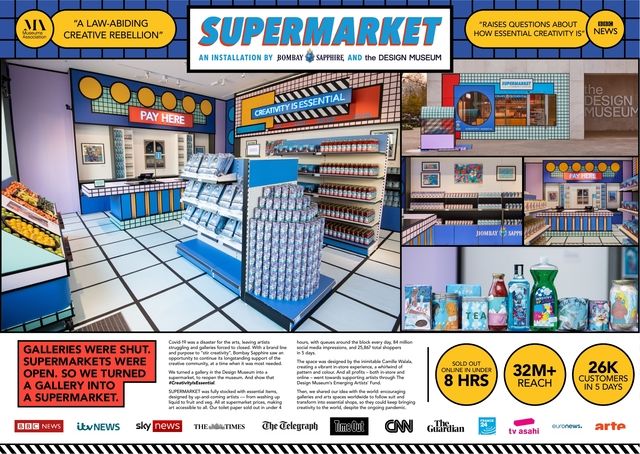 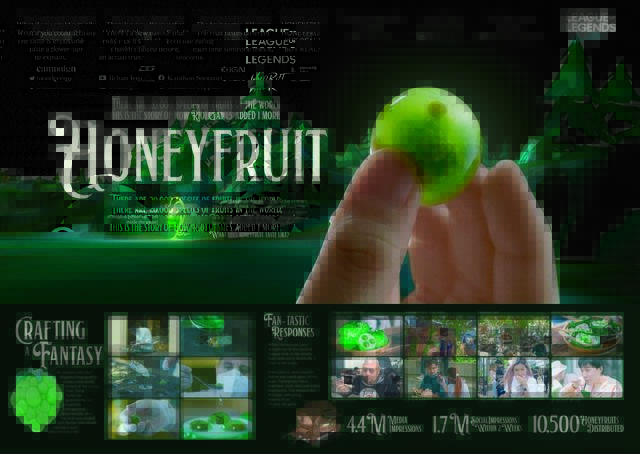 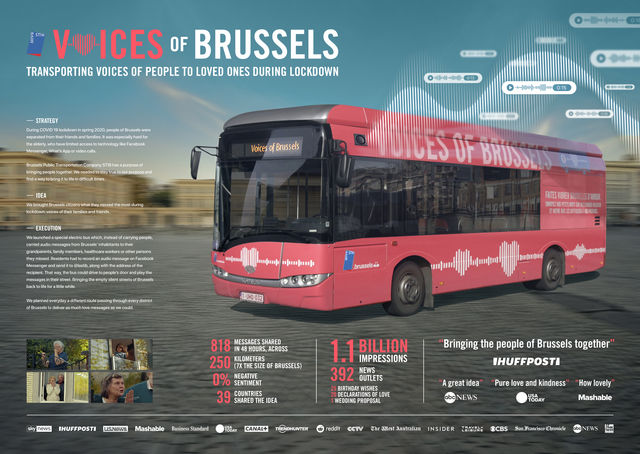