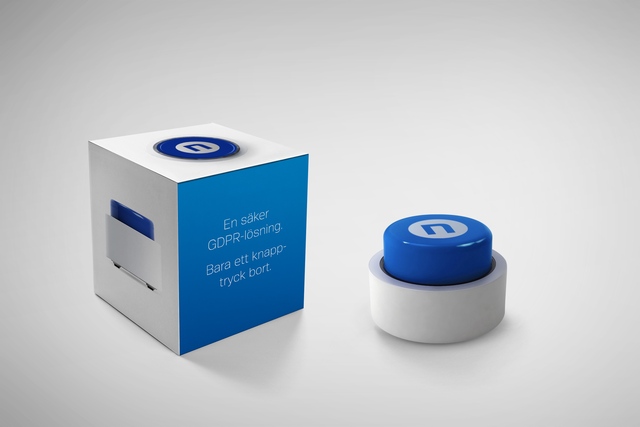 Background: GOALS & CHALLENGESTo communicate Nethouse and its GDPR-related products and other services to previously unworked "dream customers" on a brutal market.To communicate brand values and the message that Nethouse is as an interesting tech-partner, even in a wider, more long-term perspective.Nethouse is unknown within the actual market: “Top-40 companies in Sweden”.An enormous number of competing consultants were offering GDPR-related services at the time.

Idea: THE IRRESISTIBLE BUTTONHow we got some of the most sought-after CEO’s, CTO’s and IT-managers in Sweden to ask for GDPR-help from an unknown IT-consultant firm. 2018 was the year that GDPR was on everybody’s lips. The amount of communication towards the CEO’s and IT-managers at Sweden’s biggest companies from GDPR-helpful IT-firms were brutal. As an unknown IT-provider it seemed impossible to get through to the right contact person. Especially at the larger top 40 companies on the Nethouse wish list.Luckily – most of the competition where engaged in a war to scare up business. And when “everybody” keeps talking about problems, risk and worries, we saw an opportunity to deliver exactly the opposite. Nethouse is not in the scare business. They are a solutions provider. That’s the brand DNA. And they solve problems via technology, creativity and know-how. And what is the quickest, easiest way to get help to face the huge challenges posed by the new GDPR regulations? Just push the button.The button provided a solution in shaky times and got the Nethouse brand in the door at the biggest companies in Sweden. It engaged the target audience and transformed “dream companies” into business partners. All it took was a button and a short clear message communicated with perfect timing – if you need professional GDPR-help now – just push the button.___THE BUTTON’S PATHWAY & TECHThe recipient push the buttonWhen pressed – a sales alert message goes directly from the flashing button to Nethouse sales via the GSM-network. We use GSM so that recipients don’t need to adjust server settings in order for the button to access the Internet. The button works right out of the box. Not like most IoT-solutions.Sales alertThe alert message includes information (taken from the campaigns own sales tool) about the recipient who pressed the button: name, company and phone number. Sales can call them up seconds after the button has been activated. Sales callSales call the recipients up to discuss a proposal and/or book a meeting to talk furtherThe button lives!The recipients saves the buttons and many of the buttons are activated several times (by the recipient or by a colleague at the office). The Nethouse sales team follow up on all activity and continue to build customer relationships over time.A tech solution that strengthen the Nethouse brand!Nethouse is certainly a company that can competently deal with GDPR-related issues, but it is also an exciting supplier within the technological arena in general. Button recipients are dream customers in a wider, more long-term perspective. The button package Nethouse as a cutting-edge IT partner for the future.

Direct mail B to B

Lebowski
Nethouse
The irresistible button
This site uses some unobtrusive cookies to store information on your computer. I Understand